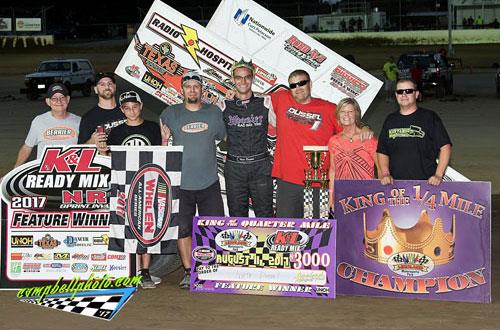 Limaland Motorsports Park swung open the gates for the final time in 2017 with the 2017 Awards Celebration presented by Childers Media Group. Special Invitational features were held for all three divisions, with the top 20 in points in each division invited. No. 22H Randy Hannagan would win the K&L Ready Mix NRA Sprint Invader Invitational, No. 65 Todd Sherman won the K&N Filters UMP Modified Invitational, and No. 22T Tony Anderson picked up the Bud Thunderstock Invitational. In the King of the Quarter Mile events, it was Nate Dussel in the No 6S picking up the win in the K&L Ready Mix NRA Sprint race, Todd Sherman doubled up on the night, winning the K&N Filter UMP Modified race, and No 82 Chris Douglas grabbed the Bud Thunder Stock race.

Kicking off the night were the NRA Sprint Invaders in their 25 lap invitational feature. No 17 Jared Horstman and No 2 Kyle Sauder would bring the field to green and would run side by side the first 3 laps before Horstman would start to pull away. Action would slow on lap 7 for No 5w Jeff Williams coming to a stop on the front-stretch. On the restart, Horstman immediately pulled back out to a large lead. On lap 9, the red flag would wave as No B20 Butch Schroeder and No 35 Ron Blair would get together on the backstretch, with Schroeder flipping over. Both drivers would be ok, but their cars were done for the evening. Caution would wave one more time on lap 11 for No 15 Brandon Ferguson spinning in turn 2. On the restart, Horstman would once again stretch his lead. Hannagan would move to the 2nd spot on lap 13 and begin to stalk Horstman, looking to gain ground on the No 17. With just 3 laps to go, Horstman nearly spun working around a lapped car in turns 1 and 2, and Hannagan was able to capitalize, slipping by for the lead. Horstman would close back in on the final lap, and tried a slide job for the win in turns 3 and 4. Hannagan was able to cross over to the inside and regain the lead for the last 200 feet, winning by just a half of a car length. Horstman would be 2nd with No 49 Shawn Dancer finishing 3rd, Sauder 4th, and No 6S JR Stewart coming home 5th.

In the K&N Filters UMP Modified feature, No 4G Bill Griffith and No 65 Todd Sherman would lead the field to green. Sherman would move to the front right away and never look back in a 20 lap green to checkered feature. UNOH Racer Will Norris would finish 2nd in the No 71, with No 22T Tony Anderson charging from 13th to 3rd. No 19B Brandon Ordway would finish 4th and Bill Griffith would complete the top 5.

The Bud Thunderstock invitational would see No 22T Tony Anderson and No 88 Bryan Martin leading the field to the green flag. Anderson would grab the lead and never look back, winning over No 82 Chris Douglas, No 1 Jacob McConnell, No 99 Andy King and No 7w Dan Wooten.

After the invitational features were completed, season ending awards were handed out to the top 15 points finishers in the K&N Filters UMP Modifieds, and Budweiser Thunderstocks. Jerry Bowersock received the K&N Filter UMP Modified track Championship and Justin long was officially crowned the Bud Thunderstock champion.

After the awards presentations, the K&L Ready Mix NRA Sprint Invaders would be the first up in their 10 lap King of the Quarter Mile race. No 6S Nate Dussel and No 22H Randy Hannagan would bring the field to green with No 17 Jared Horstman and Hannagan making contact with Horstman spinning and keeping the 17 rolling, but losing lots of ground to the leaders. Nate Dussel would lead wire to wire, claiming the $3000 winners prize and the King of the Quarter Mile Crown for 2017.

In the 10 Lap K&N Filters UMP Modified King of the Quarter Mile event, Todd Sherman appeared to be off to a 2nd easy win on the night, but No. 16 Jeff Koz had other plans, throwing a big slide job on Sherman in turns 1 and 2, but Sherman was able to cross back over and regain the lead. Koz would let it all hang out, banging the Elite Construction No 16 off the outside retaining wall on the final lap trying to catch Sherman, but to no avail. Sherman would grab the $2000 victory over Koz.

The Bud Thunderstocks would complete the season with their 10 lap, $1000 to win King of the Quarter Mile race. No 7 Jordan Conover and Justin Long would bring the 6 car field to green, with 4th place starter Kyle Moore heading to the front in a hurry in his No 11*. Moore, the 2017 Keysor Memorial champion would seemingly be on his way to a $1000 payday until his engine expired on lap 6, bringing out the caution. This would hand the lead to Conover with No 82 Chris Douglas now in 2nd. On the restart the 2 leaders battled hard for the final 2 laps, beating and banging throughout the whole last lap. In the end, it was Douglas winning the King of the Quarter Mile race by the narrowest of margins.

Limaland Motorsports Park would like to thank the drivers, teams, staff, and especially the fans for a wonderful 2017 racing season. We look forward to seeing you all back in 2018! Watch our website at limaland.com for details throughout the offseason on 2018.