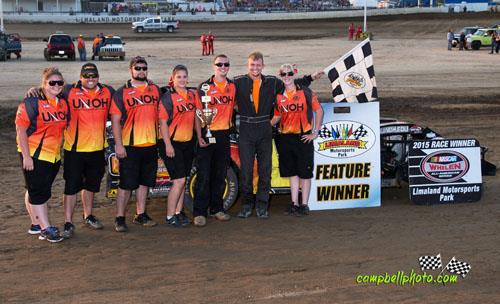 (8/14/15) – The competitors and fans gathered for a celebration of racing on the final night of the 2015 season at Limaland Motorsports Park. They witnessed some exciting action on the high banked ¼-mile oval, including the unique to Limaland occurrence of a collegiate motorsports driver/team winning a feature event.

It was the 20-lap feature for the Modifieds that saw UNOH Racer Andy Galgoci lead the field from his pole starting position to an eventual flag-to-flag winning performance. Galgoci’s #1 machine made it look easy as he carved out a straightaway advantage over points champion Jeff Koz and multi-time former champion Todd Sherman. The high side of the surface proved to be the preferred racing line for the UNOH student and despite the developing pressure from behind he was able to stay true to his line.

An incident pushed both Koz and Sherman off the pace while visiting NASCAR driver Kenny Wallace drove flawlessly with his #36 entry. Wallace marched through the field after starting on the tail and wound up finishing runner-up to Galgoci. The action left the crowd on the edge of their seats.

After Galgoci took the historic checkered flag, his team poured across the track from their pit side grandstand location and joined him on the front straight for a victory celebration. “This is amazing as I can’t thank the guys and girls behind me enough,” said Galgoci, a student from Michigan. “The University, President Jarvis, Coach Higgins and the coaches helped make this possible. This place is special as we get to do what we love while being at school.”

NRA Sprint Invaders champion Jared Horstman won his division’s 25-lap feature, although his Horstman Motorsports running mate Hud Horton and Shawn Dancer both at times held the lead during the opening 15 circuits of the race. Horton topped the field from his post starting position for the first five laps before fellow front row starter Shawn Dancer took his turn with the lead.

It was the first action on the track for the evening as there were no heat races with the unusual final night format. Horstman used a rare for him middle racing groove to push to the front after starting in row number four. Horton suffered a mechanical problem while Dancer and Devon Dobie collided in turn number two effectively ending their hopes for the win.

Jared Horstman took over race leadership on lap fifteen and never looked back on the way to his fourth NRA feature win of the season. “I was kinda nervous without knowing what the track was gonna do so we just threw a heat race setup at it,” said Horstman afterward. “It was really different seeing me on the bottom, but we did it and put this thing in victory lane.”
The 15-lap Budweiser Thunderstocks feature appeared as though it may provide a first time winner as front row starter Andy King took over the lead from pole starter Keith Schockency on lap number four. King was forced to hold off 2015 track champion Shawn Valenti through the final five laps in a furious side-by-side battle between them. It was a door panel banging final lap that saw Valenti get the better of King coming out of turn four and rolling across the finish line. Valenti’s triumph was not particularly popular with the fans.

“For the final couple of laps I had no brakes and couldn’t control my car as well in the corners,” said Valenti to a largely unsympathetic crowd. “I guess I do have some new fans tonight after this race,” he said tongue-in-cheek.

The Reineke Family of Dealerships King of the Quarter mile races produced popular winners and few surprises. Kyle Sauder took the lead on lap number six with the Sprints King race as Max Stambaugh made contact with the backside wall ending what looked like a probable conquest after leading from the start.

Sauder claimed the $3,000 prize and said after the race that his team was intent on doing well. “My car owner said I was either going to win it or we would carry this car into the trailer. This for my 10-year old buddy Jace. I wish we would race for about two more months as this thing is really just going good for us. We’ll come back next year and be ready.”

Modified points runner-up Todd Sherman dominated the King race for his division and claimed a $2,000 prize while Tony Anderson outdueled Shawn Valenti to grab the $1,000 check in winning the Stocks King race.

Track officials proceeded to made traditional banquet trophy presentations to the season’s top point’s finishers with ceremonies in front of the main grandstands. From there the competitors and fans alike moved to the pit area for a post event party. It was a new end of season format concluding the 18th year of ownership and operation of the facility for the University of Northwestern Ohio and proved quite popular.

All the latest news and information about America’s premier quarter-mile dirt track can be found at www.limaland.com.