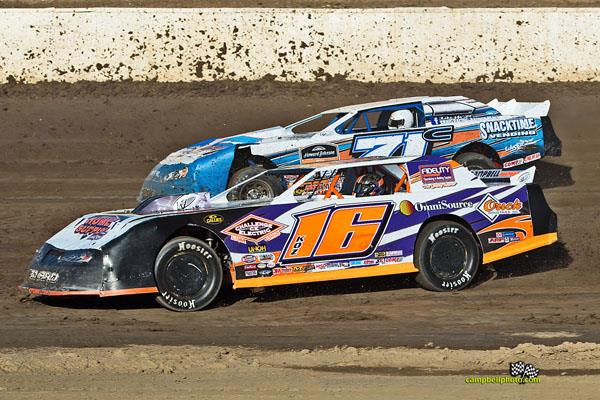 (5/30/14) – The ability to win back-to-back in any sporting event takes both skill and some luck, but to make it three wins in a row in the same event over a three year period makes its more a case of skill and quality preparation. Lima’s Jeff Koz completed the rare feat by besting a 19-car field to win the 15th Annual Steve Brown Memorial for the Budweiser Thunderstocks at Limaland Motorsports Park.

Although Koz had an excellent starting position, from the inside of row number two, he had to battle a pair of former Brown Memorial winners to finally post the historic win. Front row starters Barney Craig and Tony Anderson have been two of the most dominant performers in the division for a decade or more.

Craig took the lead from the start of the event with Koz and Anderson giving chase. The three cars produced some thrilling action with Koz trying to work inside of Barney Craig on the fast Limaland racing surface. The only caution of the event allowed the second place running Koz to close the gap with Craig.

A restart following the yellow flag on lap number nine gave Koz the opening he needed and the veteran executed a defining pass inside of Craig to take over the race lead. From that point, Jeff Koz rode the middle groove of the track and held off Tony Anderson and Frank Paladino to complete the first ever three-peat in winning the coveted Steve Brown Memorial. “We changed some things on the car and the thing really came around,” said a humble Koz afterward on the track. “It was a rocket and I just can’t thank everybody enough. To park it here for the Steve Brown (Memorial) three times in a row is indescribable.”

Although it was his first win of this season, it marked the 14th career feature win for Jeff Koz in the Budweiser Thunderstocks division.

A different kind of history was in store for the 25-lap Elwer Fence Sprint car feature as a first-time winner with genuine local roots thrilled the Limaland crowd. Max Stambaugh, a recent graduate of nearby Elida High School, drove a masterful race through lapped traffic. Stambaugh ultimately produced a winning pass to the inside of primary race leader Shawn Dancer with just two laps remaining.

Dancer had led from the drop of the green flag. He stayed with a traditional line around by driving high in the straight-aways and low in the corners. Stambaugh stayed with him until he became bogged down with slower cars. “Lapped traffic got a little crazy and I knew I had to crawl on the bottom,” said an elated Stambaugh from the winner’s circle. “Shawn (Dancer) went up top, and sure enough I came out in front and took it from there. I thank my crew chief, who came over this week and we worked on a few things and it looks pretty good now.”

The Reineke Modifieds 20-lap feature had a tough act to follow after first-time 2014 winners in the other divisions. Front row starters Terry Hull and Jerry Bowersock led the first two circuits, and were joined by Matt Westfall with a thrilling three-car wide battle. Westfall was declared the new race leader after lap number three and it was a lead he would not surrender through the duration of the event.

A pair of caution flags with only three laps remaining slowed the eventual result, but Westfall held off former track champion Terry Hull and the previous week’s feature winner Jerry Bowersock to record the win.

“Traffic got sketchy for awhile, but we had a good car,” said an emotional Westfall. “This one is for my dad. He was sick this week and was in the hospital. I sure hope he gets better!” It was the third career triumph at the track for Westfall of Pleasant Hill, Ohio.

All the latest news and information can be found at www.limaland.com. You can also find 2014 Limaland Motorsports Park on Facebook and Twitter.