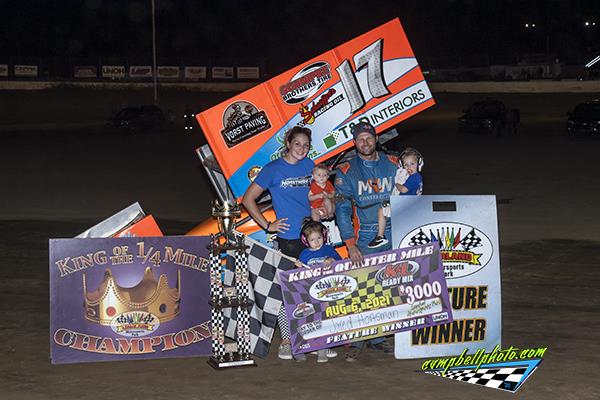 Limaland Motorsports Park wrapped up the 2021 season with the running of the traditional invitational races for the K&L Ready Mix NRA 360 Sprint Invaders, Northwest Physical Therapy Modifieds, and Budweiser Thunderstocks with #18 Todd Heuerman grabbing the NRA victory, #16 Jeff Koz picked up the UMP Modified win, and #60 Todd Sherman won the Thunderstock Invitational.  In the King of the Quarter Mile events, it was No. 17 Jared Horstman winning the K&L Ready Mix NRA 360 Sprint Invader King of the Quarter Mile, No 1* Kyle Moore bagged the Northwest Physical Therapy UMP Modified King of The Quarter Mile, and No. 74D Craig Dippman won the Bud Thunderstock King of The Quarter Mile.

Kicking off the night was the 25 lap K&L Ready Mix NRA 360 Sprint Invader Invitational Race.  On the initial start it was No. 49 Shawn Dancer and No. 1 Steve Niese leading the field to green.  Dancer and No. 18 Todd Heuerman would make contact while racing into turns one and two with Dancer spinning and making heavy contact with the turn 2 wall with the back of the Dancer Logistics No. 49 Sprint Car.  The hit was hard enough to rupture the fuel cell, and Dancer was assisted from the vehicle by the paramedics.  No further information on Dancer's condition was available at time of this story.  It was a complete restart with Heuerman and No. 2 Kyle Sauder bringing the field to green.  Heuerman took off with the lead and would only be slowed by another red flag on lap 14 for Niese getting upside down at the end of the backstretch. Niese would walk away under his own power from the crash.  Also involved was the No. 24 of Kobe Allison, who was forced to head to the work area, but returned back to the track before the restart.  When racing resumed, it was Heuerman dominating once again, and running away with the win, his first career victory at Limaland.  N. 17 Jared Horstman would finish 2nd, with Sauder 3rd, No. 16B Zane Devault 4th and No. 37 Noah Dunlap completing the top 5.

Next up was the 20 lap Northwest Physical Therapy UMP Modified Invitational Race. No. 16 Jeff Koz, and No. 19 Ryan Ordway would lead the field to the green flag with Koz grabbing the early lead. No. 95J Jerry Bowersock would work his way to battle with Ordway for second on lap 6.  No. 65 Todd Sherman would battle his way to 2nd on lap 14 before the caution flag would wave on three consecutive laps, before the field would get a 3 lap run to the finish.  Koz would hang on to win over Sherman, No. 34x Shane O'Connor would finish a close 3rd with Bowersock 4th, and Brandon Vaughan finishing 5th after starting 14th.

The final Invitational Race was for the Bud Thunderstocks.  No. 27 Frank Paladino and No. 1W Mark Wooten would make up the front row for the 15 lap race.  Wooten would grab the early advantage while No. 22T Tony Anderson began to claw his way through the field from his 7th starting spot.  On lap 8, the No. 60 of Todd Sherman had made his way to 5th from his 15th starting spot.  Sherman wasn’t satisfied with a top five as he piloted the No. 60 around a very tough top four to take the lead on lap 13, and win the Bud Thunderstock Invitational.  Mark Wooten would hold on to 2nd with No. 74D Craig Dippman third, No. 17J Jarrod Klay 4th, and Paladino completing the top five.

The drivers and teams of the Northwest Physical Therapy UMP Modifieds, and Budweiser Thunderstocks then came over to the frontstretch to receive their awards for the 2021 season.  No. 65 Todd Sherman was crowned Champ in the Modifieds, with No. 22T Tony Anderson picking up his 12th Thunderstock track championship in the UNOH era at Limaland.

In the King of the Quarter Mile for the K&L Ready Mix NRA 360 Sprint Invaders, it was No. 17 Jared Horstman picking up the $3000 victory

No. 1* Kyle Moore was crowned King of the Quarter Mile in the Northwest Physical Therapy UMP Modifieds.

Craig Dippman piloted his No. 74D Dippman Motorsports machine to the high side of the speedway to pick up the King of the Quarter Mile race for the Bud Thunderstocks.

Limaland Motorsports Park would like to thank all of the racers, teams, sponsors, staff, and especially the fans for a great 2021. We look forward to bringing you the best in racing action in 2022.